Showing posts from September, 2010
Show all

- September 29, 2010
That's right: a whole month devoted to the ever-fabulous Rekha, inspired by Sujoy at One Knight Stands . The fun starts Friday and continues all through October! I'll be writing up (at least) Khubsoorat , Nagin , and omigod Khoon Bhari Maang ! And, if I have any mental energy left, trying to get my brain around the song from Janbaaz .
15 comments
Read more

- September 24, 2010
Look. I've had a really long week (as it seems many people have - what in particular is going on in the universe to make us all so tired?) and there is no time or energy for watching, let alone writing about, any films. Very sad. But you know what is not sad? And is in fact glorious despite its lack of any real reason for me to include it on this blog? This. Why, how do you do, Friday date?
14 comments
Read more 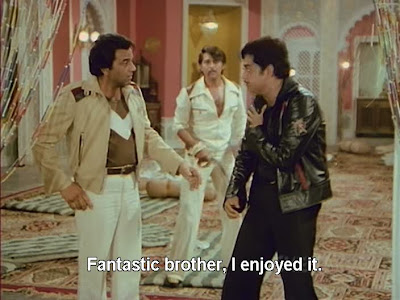 Warning: picture-heavy post. You'll see why. Well said, Dharmendra. I enjoyed this fanatastic, full-tilt masala film too! Dharmendra, Shatrugan Sinha, and the forgettable Rakesh Roshan are Ashok, Amar/Sagar, and Anand, the younger generation of a family full of secrets and lost children.* Happy families! Lots of creepy inflatable toys! In fact, that top picture says it all: Rakesh is out of focus and in the background (i.e. completely unimportant) and Dharam and Shotgun are joking around with heart after some kind of skirmish. That's most of the movie right there. But of course I have a lot more to say than that. This set-up brought to mind a sort of dystopic Amar Akbar Anthony. Right away in the "now" part of the film, the three brothers are reunited unknowingly, but instead of lying in a hospital giving blood to their Maa, they're drinking and fighting at a modern-day mehfil. Two of the brothers are rotten: Amar/Sagar is a thief in cahoots with the
22 comments
Read more
More posts